March 10, 2020March 16, 2020| in The TTABlog| by John L. Welch
The USPTO refused to register the mark CHALLEN, in the stylized form shown below, for various musical instruments, finding the mark to be primarily merely a surname under Section 2(e)(4). Evidence from LEXISNEXIS revealed 345 people with the surname “Challen,” and the 2010 Census counted 133. Twenty-five newspapers articles, mostly local, referred to persons named “Challen.” Applicant was founded by an individual named Charles H. Challen, in the 1800s, but there was no evidence that anyone named “Challen” was associated with the company for many years. Negative dictionary evidence revealed no meaning for the word, other than as a surname. I challen-ge you to predict the result of the appeal. In re Chas. H. Challen (1804) Limited, Serial No. 87517062 (March 5, 2020) [not precedential] (Opinion by Judge Cindy B. Greenbaum).

The Board found that the surname listings supported a finding that “Challen” is a rare surname. See In re United Distillers plc., 56 USPQ2d 1220, 21 (TTAB 2000) (“Hackler” held to be a rare surname despite 1295 listings in phone directories). It pointed out, however, that even a rare surname may be barred by Section 2(e)(4). See, e.g., Beds & Bars, 122 USPQ2d at 1551 (finding BELUSHI’S to be primarily merely a surname despite only five persons in the United States with that surname). [TTABlogged here]. “The relevant question is not simply how frequently a surname appears, however, but whether the purchasing public for Applicant’s [goods or] services is more likely to perceive Applicant’s proposed mark as a surname rather than as anything else.” Id.

As to the various Internet articles, many were from local papers concerning local news, with only a passing reference to someone named “Challen.” Several others appeared in specialized news sources with no indication of the extent of distribution or readership. The Board therefore found this evidence to be of little probative value and it concluded that “the relevant public has not had sufficient exposure to CHALLEN as a surname such that it is likely to be perceived as having surname significance.”

The Board noted that applicant, at its website or in its specimen of use, does not refer to its connection to Mr. Challen or promote itself as a family business. There was no evidence that “challen” has any dictionary meaning or geographical significance, nor evidence that “CHALLEN” has the structure and pronunciation of a surname. Finally, the Board concluded that the stylization of the proposed mark was not unusual and did not create a separate commercial impression that would have lifted the mark over the surname bar.

Conclusion: “[T]he record, as a whole, does not establish that the primary significance of CHALLEN to the purchasing public is merely that of a surname within the meaning of Section 2(e)(4), and instead would be viewed as a fanciful, coined term.” And so the Board reversed the refusal.

TTABlog comment: How did you do? Did you know that in 1935 applicant built the world’s largest grand piano, for the Silver Jubilee of King George V and Queen Mary? 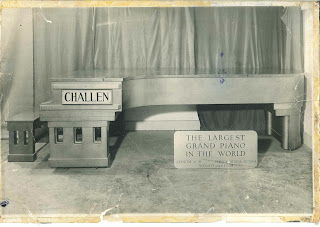 TTABlog Test: How Did These Three Section 2(e)(1) Mere Descriptiveness Appeals Turn Out?